How AI is
cleaning the ocean

By The Times, published in "AI for Business" supplement

Offshore wind power has rapidly ascended the ranks of energy sources in the past decade. Its growth is expected to continue, with generation capacity predicted to soar from 35GW to 234GW over the next 10 years, according to the Global Wind Energy Council (GWEC), which ranks the UK, Germany and China as the largest national markets.

Offshore wind is proving particularly popular in governments’ energy strategies, given the plummeting cost of provision and the fact that turbines can be placed ever further out to sea. As a result, the GWEC predicts the compound annual growth rate of offshore wind generation over the next five years to be nearly 32%, compared with 0.3% for land-based turbines.

Advances in wind generation are crucial to nations’ efforts to decarbonise their economies and reduce their environmental impact. But a problem has emerged: the extensive work required to maintain offshore structures, given the stress on them exacted by the seas, is creating surprisingly high levels of pollution.

This has arisen from the need to send out large ships, which carry the subsea robots that are used throughout the year to monitor structural aspects of the turbines, including the integrity of cables and the extent of seabed scour around foundations. These vessels are often crewed by up to 60 people, from engineers and robot drivers to cooks and cleaners.

Their impacts are enormous, reports Brian Allen, founder and CEO of marine technology business Vaarst. “The vessels, which cost £1m to £10m a month to operate, depending on the job, will emit 275,000 tonnes of carbon over their lifetimes. This is something the industry is pushing to change quickly,” he says.

Oil and gas suppliers also use these highly polluting ships to monitor their key marine assets and conduct subsea surveys. They too are urgently seeking ways to reduce the vessels’ environmental impact. Until recently, there was little that they could do in this respect. But, in the past few years, the maturation of cutting-edge systems has set in motion a vast transformation, removing their need for the ships.

“Artificial intelligence, 3D vision and autonomous robotics have been at the heart of the change, empowering the rapid removal of these large vessels,” Allen says. “This is essential to cutting environmental impacts while increasing efficiency.”

The use of these technologies is catalysing the growth of offshore wind generation by reducing its costs dramatically and helping the sector to deliver on the promise of a minimal environmental impact. This has created a virtuous cycle: as the cost of producing each kilowatt using offshore wind falls, investment and policy support grows. This enables larger wind farms to be created, thereby achieving economies of scale, which in turn makes clean energy cheaper for consumers.

The installations are also creating bio-diverse shallow reefs around them. 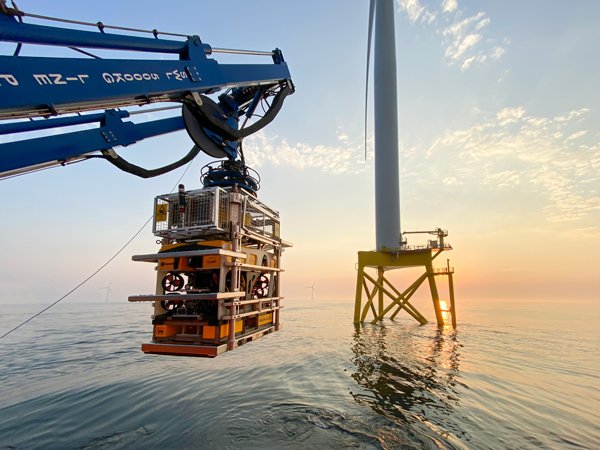 “Offshore wind farms are turning to AI, removing the need for massive inspection costs and hundreds of hours of examination,” Allen says. “In the coming years, fully automated vessels will become available. In the oil and gas sector, this technology will also be essential in the process of decommissioning older assets more rapidly.”

Some of the most successful offshore energy firms work with Vaarst, which provides cutting-edge technology for underwater AI. The Vaarst 3D vision system enables the rapid collection of data from subsea robots, as well as drones and climbing robots that work above the waterline, with real-time streaming to connected devices anywhere in the world.

The company’s machine learning delivers rapid and actionable analysis to operators, with trials already in place with oil super-majors, and fully commercial autonomous subsea robots are expected to prototype soon, says Allen, who adds: “Powerful AI technology is helping wind farms and oil businesses to become much more efficient and far less polluting. This will be vital to achieving environmental targets, helping countries through their clean energy transition.”

Vaarst, which is shortly starting a series B funding round, is profitable and has backing from sustainable equity investors, venture capital firms and energy companies.

Allen expects that, given the growth of the technology and the multi-trillion-dollar addressable marine energy and subsea internet market, Vaarst will double its revenue again to £25m next year and continue growing at that sort of pace. “We’re aiming to become one of the UK’s unicorns, with a billion-dollar valuation within the next three to four years,” he says.

Offshore energy businesses continue to be particularly active in using Vaarst’s technology because of its adaptation to popular remote-operated underwater robots and the application of true autonomous AI to deliver ever larger efficiencies.

There is also strong potential to apply the technology to other sectors, as Allen explains: “These systems have been battle-tested in the sea, one of the world’s harshest environments. While marine is our focus, we could also imagine using the technology on land in the near future. The visualisation and data flow, the machine-learning analysis and the automation are all applicable to construction and other land-based industrial settings.”

It’s clear that AI has a key role to play in cleaning the ocean by delivering more efficient greener energy and reducing the use of highly polluting ships. As offshore energy suppliers increasingly take up 3D vision and machine-learning analysis while preparing to introduce fully automated vessels, they will create much healthier seas and achieve sustainable energy production that will meet the world’s growing demands.

One more step. Please complete the form below and a member of the Vaarst team will be in contact shortly to conduct a bespoke demo of the ML platform.

Speak to a member of the Vaarst team

Interested in accelerating your business performance through the use of mobile robotics? Speak to a member of our team